December 10, 2019
Forum German-Armenian Journalist Exchange 2019
‘WE DON’T HAVE TO DIE TOGETHER TO BUILD BROTHERHOOD’

After years of persecution, fear and suffering Christianity was adopted as state religion in Armenia. Only two percent of the society in Armenia is of a different religion, and Yezidis are the largest minority with about 40.000 representatives in the country. Some of them still live in Yezidi-populated villages far away from the capital Yerevan. There is quite little cultural exchange between Yezidis and ethnic Armenians. They face discrimination in various fields, and education is one of them. I talked to the founders of Yezidi Center for Human Rights, an NGO dealing with this kind of problems. They explained the difficult situation with being a minority in a Christian dominated society.

Isabel Broian is a Yezidi human rights defender. She did her master in human rights and migration. In her life Isabel has experienced a lot of injustice and that is why she decided to get engaged with minority rights. She has always been wondering why the Yezidi community cannot fully enjoy human rights in Armenia.

Sashik Sultanyan is the head of the Yezidi Center for Human Rights. He also coordinates the programs of the center. Sashik works for the NGO because he realized that the work for minorities in Armenia goes in a wrong direction and therefore decided to change something in minorities policies by himself. 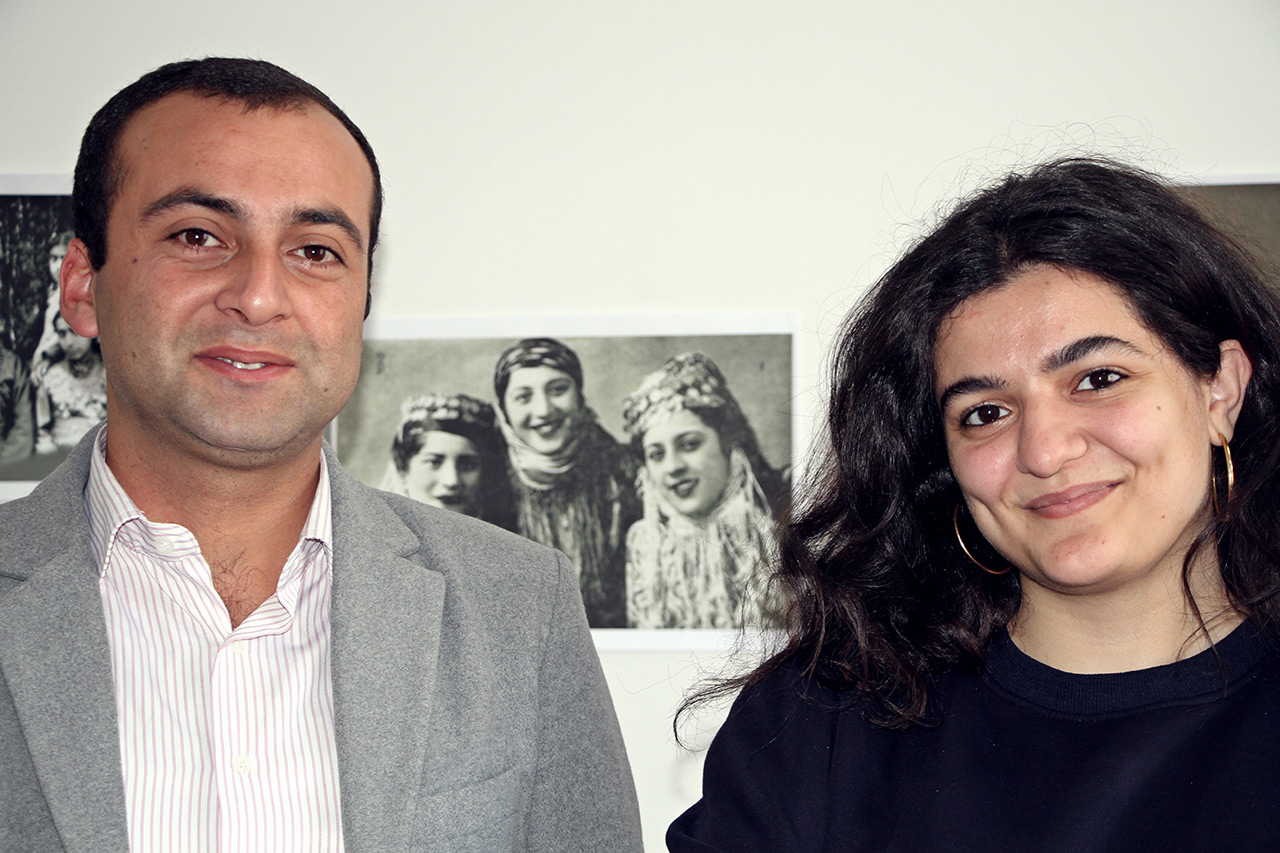 Sophia Stahl: You are of the opinion that minorities policies went in a wrong direction. Could you provide more details on what went wrong?

Sashik Sultanyan: Even after the collapse of the Soviet Union there was still a traditional and old-fashioned mode of dealing with minorities. For example, the problems of national minorities were hidden, and the government created stereotypes like the one that suggests that Armenia is the best country for minorities. The source of the problems of Yezidis has always been reflected on their culture and tradition and not on the Armenian society.

Isabel Broian: Yes, after the collapse of the Soviet Union Yezidis got the so-called leaders as representatives of the Yezidi community, and they used to say that everything is okay, and Armenia is the best country for minorities.

Sophia Stahl: And for you this wasn’t true?

Isabel Broian: No, Armenia didn’t offer the best opportunities for minorities and still does not provide its national minorities with mechanisms for the implementation of their rights. For example, not all of the Yezidi youth have access to education. Only а few of the Yezidi community have university degrees, and I was wondering why the situation is like this. We also have the issue of early marriages in our community, as the traditionalist Yezidi leaders in Armenia don’t accept the fact that the age of 12 or 14 is too young for marriage.  And the former government didn’t intervene and accepted young-age marriages as a binding tradition and part of culture.

Sophia Stahl: So, were the politicians too shy in the past to say something against minorities or did they just not care?

Isabel Broian: They didn’t care, they definitely didn’t. For instance, politicians also told us that it is a tradition of the Yezidis to be uneducated. So, it is always difficult for us as a minority to say that we have a problem.

Sophia Stahl: But now Armenia is on the move due to the Velvet Revolution and the new government. Has anything changed also for you?

Sashik Sultanyan: The former government had created a system to discriminate minorities: they used to hide the problems. But now nobody is forcing us to be silent, so this is a step forward, we can raise our voice now. However, there are still mechanisms missing to protect the minorities in Armenia.

Isabel Broian: And we shouldn’t forget that the government is new and the problem of discrimination has been around for more than 30 years in Armenia. Thus, this problem can’t be solved quickly. But it seems to us the new government is willing to listen to, and we are doing our best to help them improve the situation. Time will show.

Sophia Stahl: So you call on the government to protect minorities?

Sashik Sultanyan: Yes, we want to raise awareness on the situation of minorities in Armenia. But not only the awareness of the government, but also that among the Yezidis of Armenia. We teach our community to demand their rights.  Sometimes they don’t even know their rights.

Sophia Stahl: Which rights for example?

Sashik Sultanyan: We have a serious problem with the implementation of education rights obviously, since the majority of Yezidi children don’t finish school.

Isabel Broian: Because some of them get married at a young age.

Sashik Sultanyan: Especially in these cases intervention from the government is missing to fight against harmful traditions. A lot of people think that this is an issue of the Yezidi community and isn’t related to the official policy. We want to change this. These opinions are the reason that the official policy doesn’t recognize that discrimination occurs in our daily life.

Sophia Stahl: Do you have an example of discrimination against Yezidis in Armenia?

Isabel Broian: Yes, for example, the word ‘Yezidi’ is used as an insult at school. We also have a case when a 12-year old girl doesn’t go to school anymore because she was subjected to discrimination, and teachers didn’t say anything against it. Some teachers say, “You came to our country, you don’t have the right to criticize us.” There are still stereotypes and hate speech about Yezidis in the society, as there is no exchange between the Yezidis and Armenians. As a result, young Yezidis struggle with their culture, tradition and identity.

Sophia Stahl: Have you also experienced discrimination on yourselves?

Isabel Broian: Yes, I will give you an example: my friends didn’t know that I am Yezidi, so they used the word ‘Yezidi’ as an insult. This was extremely difficult for me, as I was a child. Because of that I struggled with my ethnic identity and hid my Yezidi origin.

Sophia Stahl: And how do you feel now, dealing with your roots openly.

Isabel Broian: When I told my friends that I am a Yezidi, their reaction was like, “Oh, you don’t look like a Yezidi.” Then I discovered my own culture and understood the concept of human rights. I realized there is something wrong with the Armenian society.

Sophia Stahl: Your NGO also has a youth club. You try to give the Yezidi youth self-confidence with this project?

Isabel Broian: Yes, we want to empower them to stand up for their rights. We tell them about our rich culture and traditions. Now they are motivated to respond to discrimination, for example, saying clearly, “No that isn’t true.”

Sophia Stahl: What do you think about the recently constructed temple? Can the world’s largest Yezidi temple be considered a step forward for the Yezidis of Armenia?

Isabel Broian: It would be great if there were traditional ceremonies there, and the temple became a place for unification of all the Yezidis in Armenia. But for this we must work hard and we are in that process.

Sashik Sultanyan: We want to find opportunities to talk about minorities and our vision. We want to use the temple for communication.

Sophia Stahl: So, in your opinion the most important step forward would be the exchange among different cultures?

Isabel Broian: Yes of course, we have to introduce subjects like cultural exchange at school.

Sashik Sultanyan: We have to create mechanisms for communication within the civil society.

Sophia Stahl: But are Yezidis integrated into the Armenian civil society these days?

Sashik Sultanyan: There is still a lot of work to do. In order not to feel discriminated, you have to assimilate. And we don’t want to lose our cultural identity. This is why there is no great progress with regard to integration. For example, some Armenians say, “We are brothers with Yezidis because we both live in the region and for both cultures Nagorno-Karabagh is important.” But for me it is not the best way to build brotherhood, we don´t have to die together.

Sophia Stahl: How can this brotherhood be built?

Sashik Sultanyan: We need more institutional procedures to break stereotypes and to protect Yezidis. For example, there are no mechanisms to protect minorities in the decision-making process. The situation of minority rights depends on the government representatives. And this could change very often and fast. There are only four seats in the Parliament for representatives of minorities. Furthermore, these seats are occupied by the ruling parties, not by minorities. But can you imagine that such a small group of politicians will protect minorities? I can’t!

Sophia Stahl: What are your hopes for the future? What is the goal of your work?

Isabel Broian: For me, it is also very important that minorities don’t hide their own identity anymore as I did in my childhood, and everyone in Armenia can speak openly about his/her identity.  I want the society be more tolerant.

Sashik Sultanyan: My dream is to turn on the TV and see some Yezidis, a presenter from our Yezidi community, for example. So I’d think, “Here is my opinion on TV. I am represented…”

Sophia Stahl studies political science and journalism at Technical University of Dortmund. From January 2019 until July 2019 she studied at the University of Perugia (Italy). As a journalist, she is mainly interested in politics and social issues. To Sophia, being a journalist means presenting every perspective and making every voice loud enough to be heard.