December 9, 2019
Forum German-Armenian Journalist Exchange 2019
‘MANY THOUGHT SOMETHING WOULD CHANGE’: Interview on LGBT Rights in Armenia

Luiza Vardanyan, black blazer and fox red braid, is sitting her legs crossed in a room in which otherwise consultations take place for those in need of protection: lesbian, gay, bisexual and transgender, as well as LGBT activists. There is a wall of books in the background. The curtains are closed.

Luiza works as a lawyer for PINK Armenia. The NGO engaged with LGBT-rights is located in an anonymous place in Yerevan. Not even the neighbours know that there is an office in the two-storey house – for security reasons. 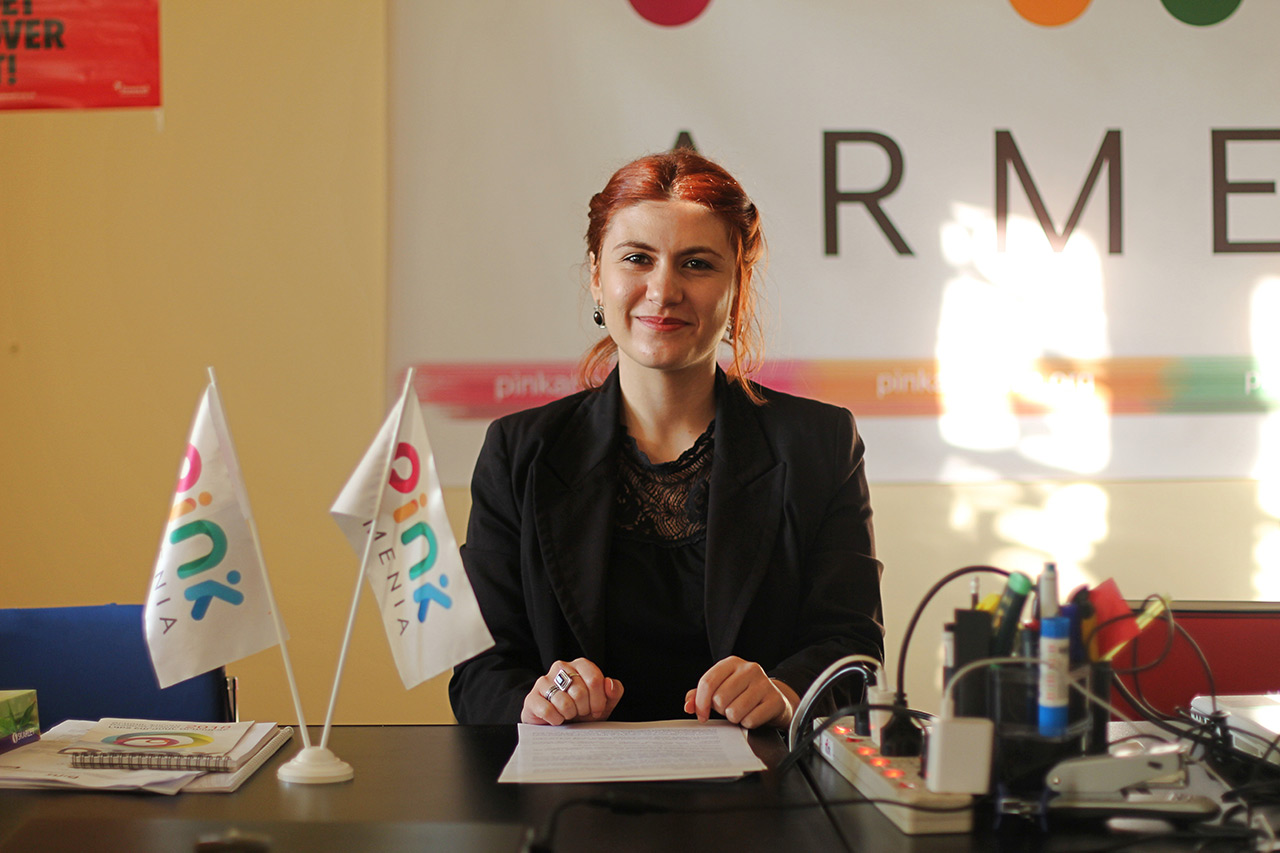 Ann Esswein: What changed in terms of LGBT-rights over the past year following the revolution and the formation of the new government?

Luiza Vardanyan: Following the revolution many thought something would change. However, after the first three months, it became clear that it will not be so. Violence has even increased. We recorded 29 cases of violations in 2018. In the past months of 2019 we have already registered more than 30 cases and still have two months ahead. Almost nothing has changed.

It was only August, three months after the revolution, when a group of LGBT activists were attacked in a remote village called Shurnukh. The nine young people just wanted to rest in the countryside with candle-light dinner and vegan food. That was what the villagers saw, as they climbed on the roof and looked through the windows. There were women with short hair and men with long hair, some seemingly wearing women’s clothing. It was suspicious to them. The next day the group was beaten by 30 villagers, who used their hands, feet and stones. They were shouting, “You have to leave the village, we don’t want you to exist”. Some needed to be taken to hospital. Two victims of the incident have applied for asylum in Europe.

In November the investigative body closed the case. It became clear that they do nothing to protect LGBT rights. We have challenged the decision, and the case has been reopened. We are going through the investigation process once more to set the point: this was not about beating, this was a hate crime.

A. E.: How are the violations of LGBT rights manifested in day-to-day reality?

L. V.: Many trans persons do not get a job. So, they can never be financially independent. They are easy to oppress. In April 2019, for the first time in history of Armenia a transgender woman made a speech in the Parliament. After that there were so many cases of hate speech that we faced difficulties recording all. People started attacking transgender people in the streets: they were very afraid.

A. E.: On your website and on Facebook you publish letters, in which children describe their coming out to their parents. The authors stay anonymous. Why?

L. V.: The authors of the letters are afraid of outing. The relationship with their families could be damaged. Or even more: they are exposed to beatings or reprisals. In the future, we will also publish the letters of parents, who describe their difficulties in accepting that their children have a different sexual orientation or gender identity.

A. E.: What does your family think about you working with PINK Armenia?

L. V.: I also face discrimination in my family. They always want to persuade me to leave the job. They say it is not appropriate for a woman to have such an occupation. Everyone knows that I only work here. Just imagine how it is for the others.

Recently I was working on a survey, and I discovered that only three out of the 60 interviewed said they had not experienced violence when they came out. Some cried, as they remembered the attacks.

This year most of the cases of domestic violence have occurred due to the fact that parents learnt their children were LGBT or protecting LGBT rights. Those were psychological or physical forms of violence: Parents no longer allowed their children to go to school or university. They took their mobile phones and cut the access to the Internet. Some did not allow their children to go out at all. The problem is that many children do not want to sue their parents. In the Armenian society family is the most important thing. Victims do not report to the police. We know only about eight cases of domestic violence in 2019. And all of them have been withdrawn.

Meanwhile, the government denies that the problem exists. There is still no anti-discrimination law.

A. E.: The one, which PINK has been demanding and helped to develop since 2012?

L. V.: Yes. We were in a committee that drafted the law. Nevertheless, nothing happened. The government has never recognized divergent gender identities and sexual orientation in any of its legislation, although we have proved that LGBT are the most vulnerable group in the society. However, the government denies that argument. We have no hope that there will be such regulation in any law.

A. E.: Apart from that, there is the Istanbul Convention, an international document to protect domestic violence, violence against women and also sexual minorities. Why has the convention never been ratified?

L. V.: The Istanbul Convention was repeatedly manipulated by political parties, as well as people paid by the previous ruling government. There is a dominant propaganda claiming that the convention would allow same-sex marriages.

A. E.: But that is not even mentioned, it is about domestic violence…

L. V.: Yes, the Istanbul Convention says nothing else than that gender is a social construction. It seems that the opponents have not even read the Convention. The LGBT community is only used in this case. Opposition members manipulate where the society is most sensitive. It is a political issue. Just the name ‘Istanbul Convention’ disturbs people. But it does not matter who signed it and where. It is important for women and minorities that there is a legal base so that perpetrators can be held responsible.

A. E.: What would change, if the Istanbul Convention were ratified?

L. V.: I think every legal act that protects human rights changes something: just the awareness of the right and that it is protected. It is a step towards democracy, but it will not change something universally in a short period of time.

We know that about forty percent of all cases of domestic violence are related to gender orientation. So far we have not been able to work preventively. We need information and education to minimize the number of incidents. If the government were aware of the problem, we could register more cases of domestic violence. Those affected rarely report incidents to the official authorities.

L. V.: The victims do not want to go to the police. The officers are not skilled or trained to work with those affected. They may harm them even more. We recently went to the police with a minor still under the full control of her parents, and a 40-year-old officer tried to convince the girl to drop the application. Had she been there without a lawyer, she would have done it.

The officers usually ask one by one for details in an environment, where there is no safety or room for privacy. The victims do not want to go through this again. It is a psychological violation and an inappropriate method to deal with such crime.

After a first incident the perpetrator of domestic violence is merely warned. The victims feel powerless. We need a law – whatever it is called – an anti-discrimination law or Istanbul Convention, so we have something in our hands. It is not an immediate weapon, however we could have something to use in the court.

A. E.: With regard to the Istanbul Convention, in political circles it is common to say that the society is not yet ready for it, meaning to recognize gender diversity and combat discrimination. When will it be ready?

L. V.: The Society needs education. They do not know who LGBT people are. They are not familiar with sexual orientation and gender identities. For them a homosexual person using lipstick is strange. There is no difference for society whether the person is gay, transsexual or someone else.

The first step, however, is that we have a law protecting people of all sexual orientations and not just words. The government has to demand this from the society. We also have to educate people with books, videos, social campaigns. We do what is still neglected by the government. I hope the situation will get better.

Ann Esswein is a multimedia journalist based in Berlin. She has studied journalism and humanitarian action in Sweden, Germany and Ireland. Mostly from abroad, she reports on asylum and migration, development cooperation, humanitarian crises and environment.