May 13, 2022
Events | News
ANP Assembly dedicated to the issue of the election of a new ANP Facilitator: ANP has a new Country Facilitator 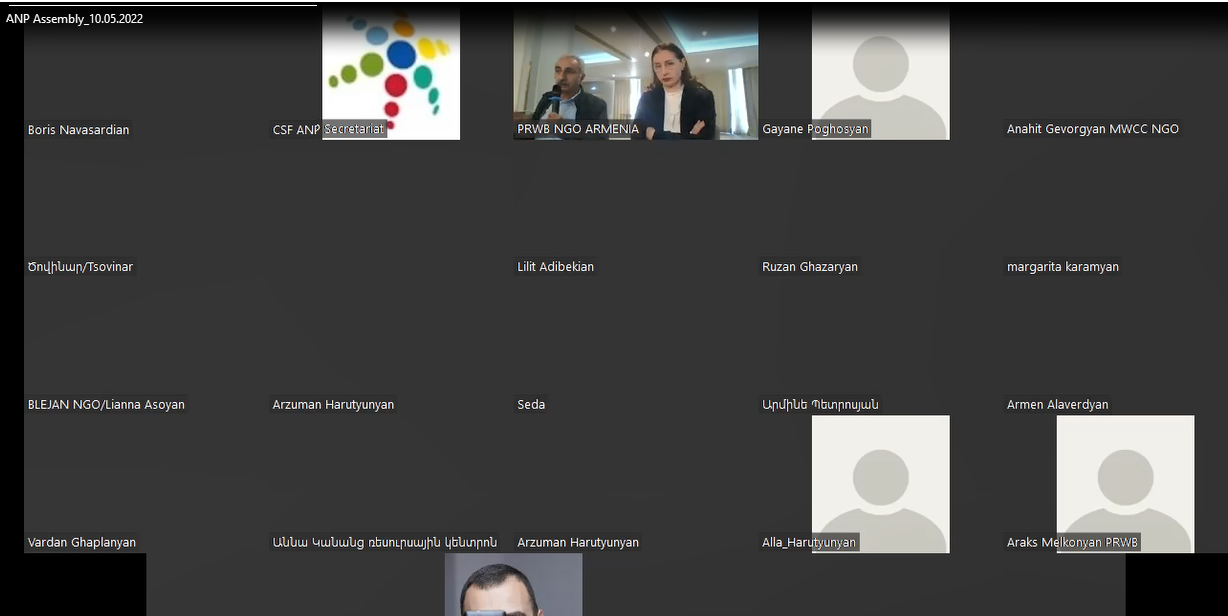 On May 10, 2020 an EaP CSF Armenia National Platform Assembly was held at Armenia Marriott Hotel. The Assembly, which was in a hybrid format, was attended by ANP 28+ (number of online participants) members, including 27 of the 52 members of the ANP 2021-2022 cycle delegates’ assembly. The quorum was met.

The main issue on the agenda was the discussion of the results of the CSF Armenia Country Facilitator recent elections and the steps to solve the situation.

First, the ANP Secretariat Executive Director Heriknaz Harutyunyan presented the details of the ANP Coordinator early election. According to the results of the online secret ballot held on April 26, 2022, 13 out of 20 Armenian delegates of the current CSF cycle participated in the elections, 9 of which voted for and 4 against the only candidate for Facilitator – “Free Citizen” Civic Initiatives Support Center President Hovsep Khurshudyan. This was followed by the statement of the ANP Secretariat Director that no national facilitator had been elected, as according to the ANP Statute paragraph 3.11.2, “the CSF ANP Facilitator shall be elected from among the Armenian delegates by simple majority vote of the ANP delegates in a secret ballot”, meaning the majority of the total number of delegates, i.e. at least 11 persons had to vote for.

Afterwards, CSF Armenia Country Facilitator Lousineh Hakobyan had presented her position that the votes should have been counted not from the total number of voters (20 delegates) but from the number of those who took part in the voting.

The Assembly attendees had a lively debate on the interpretation of the ANP Statute paragraph 3.11.2, followed by a vote where 19 out of 27 members of the Delegates’ Assembly voted for the national facilitator to be elected by a simple majority of the total number of delegates, i.e. by at least 11 votes in favor.

Following the online circulation of for and against opinions, it was decided to convene an ANP Assembly and allow the members of the ANP Delegates’ Assembly to decide on the issue of controversial interpretation of the relevant point of the ANP Statute.

Afterwards, the proposal to extend the voting period of the election of the Country Facilitator and to give an opportunity to those who had not voted was put to a vote and accepted by 17 votes in favor. On May 14, at 16:00, the extended voting for the 7 delegates who had not participated in the first election ended. 6 delegates took part in the voting in the extended period. The votes were distributed as follows: 4 for, 2 against. In total, 19 out of 20 delegates took part in the extended voting.

Thus, with the combination of the votings, the ANP Secretariat stated that: