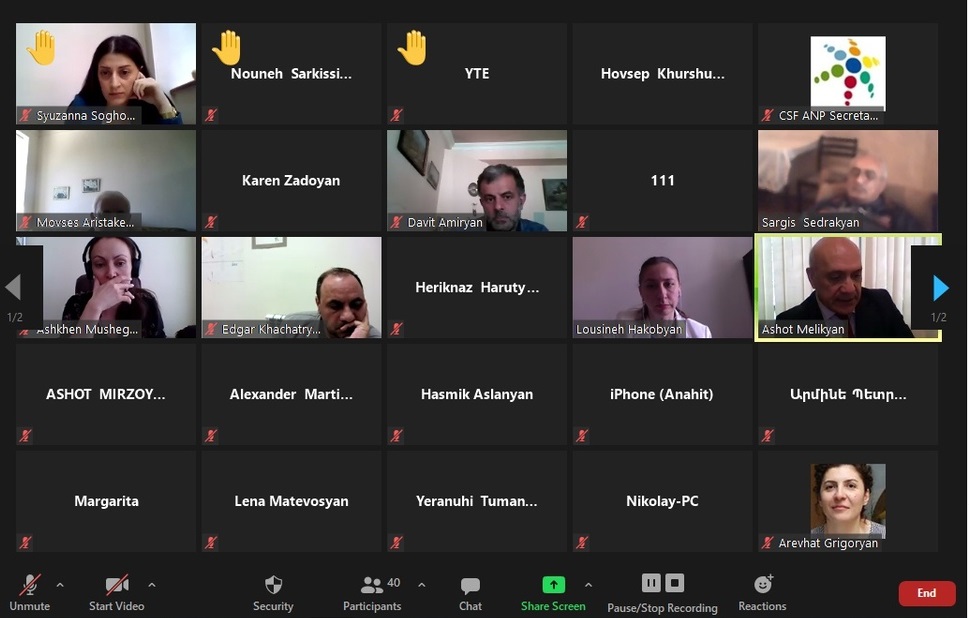 On May 12, 2021 the EaP CSF Armenia National Platform online Assembly was held with the participation of 44 ANP members, including 27 members of the CSF Delegates’ Assembly.

The following issues were on the Agenda:

At the beginning of the event CSF Armenia Country Facilitator Lousineh Hakobyan the document titled “Procedure on the Establishment of the Composition of Armenian CSOs and Foundations of the Civil Society Platform as stipulated by Article 366 of the EU-Armenia Comprehensive and Enhanced Partnership Agreement”, which was developed by a special working group, after which an extensive discussion took place on a number of points, including the engagement of different civil society networks in the Platform. According to the document discussed, “The current Procedure outlines the functions of the Election Commission set up to manage the process of election of new members to the CSP from among the representatives of NGOs and foundations registered in the Republic of Armenia, as well as the organization of the activities of the Commission and procedures for nominating and electing candidates for CSP membership (hereinafter elections). The Election Commission consists of five members: three of them shall be appointed by the Armenian National Platform of the Eastern Partnership Civil Society Forum, one by Partnership for Open Society initiative and one by Constructive Dialogue Network of Armenian CSOs. The Commission shall select a president from among its members by a simple majority of votes.”

Following the discussion and several amendments the document was put to a vote and approved by 19 votes in favor, 6 abstentions and 2 against.

In the second part of the Assembly the participants almost unanimously adopted also the ANP 2021-2022 Strategy with only one person voting abstained. The document had earlier been circulated among the ANP members and the CSF Secretariat and amended taking into consideration various recommendations.