At the Gesundbrunnen station in Berlin, a young man in sportswear is walking in front of us. We are Armenian journalists talking in our native language at the station. The man suddenly turns around, looks at us and says “Hay eq?” (“Are you Armenian?”). Yes, we are, and so he is. We start to talk. His name is Artur. “When I heard you speak Armenian, I felt my heartbeat in my throat”, he tells us,

Artur is 19 years old, he is an athlete dedicating his time to wrestling and kickboxing. He was born in the village of Artashar, Armavir region in Armenia. It has been already six years that he lives in Germany with his family.

“It was fine, we used to live a normal life in Armenia. In my village we were doing farming and cattle-breeding. We had relatives in Germany and decided to move in with them,” says the young man.

“Here, you go to the Government, and they ask you about your problems. We said we wished to stay here, and described what Armenia’s situation was: hard life in the villages, where it is very difficult to make a living. I said I wanted to dedicate my time to sports. That’s it. Afterwards, they said ‘let’s see how you behave here one or two years, whether you learn the language or not’, etc.”

Artur says they spent the first year in a center for migrants, where the conditions were “very bad”.

“The very first year they were providing us with food. All the migrants were eating together. The bathroom and toilet were shared. We couldn’t work, because it was not allowed. One year later, we moved out to another center, where we spent a year and a half, and then finally we were granted a status and moved to an apartment. Only after that did we obtain permission to work,” Artur concludes.

The young athlete now speaks German. He notes that it was very difficult for him to learn the language, however, in order to get the rights to stay in the country one must speak German. He adds that he is happy with his life. Most importantly, the family members are now employed.

“Currently, my brother works as a mechanic, my father renovates houses, my sister studies dentistry, my mother does not work. Here we obey the Law, the rules of the German society. That is why we don’t have any problem,” says the young boxer.

Armenian presence in Germany traces back to the late 19th century. The first inflow of Armenians happened after the 1915 genocide, and the second, after the Second World War.

Originally Germany was a place of education for many famous Armenians. Legendary composer Komitas, writers Levon Shant and Avetik Isahakyan, painter Vardges Surenyants, Bolshevik revolutionary Stepan Shahumyan and many others received their higher education in Germany.

In the last decades the Armenian community grew in number due to the influx of Armenians from the Middle East. The second wave of mass emigration from these countries took place in 1970s, after the Islamic Revolution in Iran and the civil war in Lebanon.

Armenians in Germany are mostly organized around two institutions. One of them is the German-Armenian Diocese of the Armenian Apostolic Church, located in Cologne. The church has community organizations under its umbrella. The other is the Central Council of German-Armenians, which encompasses both social and cultural associations.

According to the data of the German Prelacy of the Armenian Church, there are fourteen church communities and more than twenty Armenian non-governmental organizations and associations in Germany.

According to the Armenian Embassy to Germany, the estimated number of German-Armenian community members is about 60,000. However, this figure is likely to be different today, as the new emigration of Armenians has begun since Armenia’s independence, and the number constantly fluctuates.

Armenians want to have an “American dream” in Germany

It is not a secret that European countries, and especially Germany, are seen by many Armenians as socially and economically stable states able to provide a better life. The Armenians go to Germany to study, get medical help, work and just live. Their profiles are quite varied: intellectuals, educators, employers, unemployed and others move from Armenia to Germany.

But the way, getting an asylum in Germany is not easy, and not everyone succeeds.

For the sake of settling down in Germany and building a future, Armenians first apply for asylum and then for the refugee status.

However, according to the Refugee Convention of Geneva of 1951, a person is considered a refugee, having reasonable motives to escape persecution for the following reasons:

In fact, the main reason for the migration of Armenians to Germany or other European countries is a socio-economic one, which, however, does not fall under the aforementioned grounds for refugee status. And many Armenians are forced to turn back.

An Armenian family in Dresden was forced to return to Armenia after eleven years spent in Germany. The story was reported by the media and local demonstrations took place to impeach the deportation of this family.

In November 2017, the Dresdner Neueste Nachrichten newspaper reported that the parents had come to Germany in 2006 and pretended to be Iraqis, which turned out to be untrue only in 2014. According to the regional directorate, the couple hid their identity from the authorities for years. The three children, born in Germany, also have Armenian citizenship. From the perspective of the Refugee Council, all integration requirements were met. But those integration efforts were not enough. The Hardship Commission added that even the mother and ten-year-old daughter had to return to their homeland. The chances and hopes to stay in Germany were considered low. The mother and daughter considered voluntarily going back to join the other three family members. Such stories are common in Germany. Many deported Armenians lived and are still living in the same desperate situation.

According to the data of the Federal Office for Migration and Refugees of Germany, 1594 Armenians applied for asylum in the period of January to September 2018. The number of Armenians seeking asylum in 2017 reaches 3852. It is noteworthy that Germany registered 9881 applications for asylum (this number also includes applicants of the previous years) in 2017, and 7048 or 70% of those applications were rejected.

The number of refugees from Armenia to Germany has risen sharply in recent years. In 2008 there were less than 300 refugee status seekers. Currently this number has reached 3000.

Neighbouring Georgia has been enjoying visa-free regime since March 2017. According to the European Asylum Support Office, the number of Georgian citizens seeking asylum in the EU countries has more than doubled, from 867 in January 2017 to 1859 the same month of 2018. Almost every second of them applied for asylum in Germany.

Germany and Sweden stated about the possibility of freezing visa-free regime with Georgia this year. But the EU decided to give Georgia some time.

Armenia and the EU concluded the Comprehensive and Enhanced Partnership Agreement last year. People in Armenia hope for visa-free travel, although the document does not stipulate visa liberalization.

An official source in the German Foreign Office told online media outlet CivilNet that “Germany recognizes Armenia’s efforts towards progress on Visa Liberalization Dialogue and Mobility Partnership. Visa facilitation and readmission agreements between the EU and Armenia have already been in force since January 1, 2014 (…).  The launch of this dialogue may be proposed by the European Commission in due course, provided that the benchmarks for well-managed and secure mobility are met. This implies an effective implementation of the visa facilitation and readmission agreements”.

Germany’s Chancellor Angela Merkel also touched upon visa liberalization in her first official visit to Armenia in August of 2018. “The visas related to Georgia and Ukraine have been liberalized. We will do our utmost to achieve visa liberalization with Armenia,” she said. 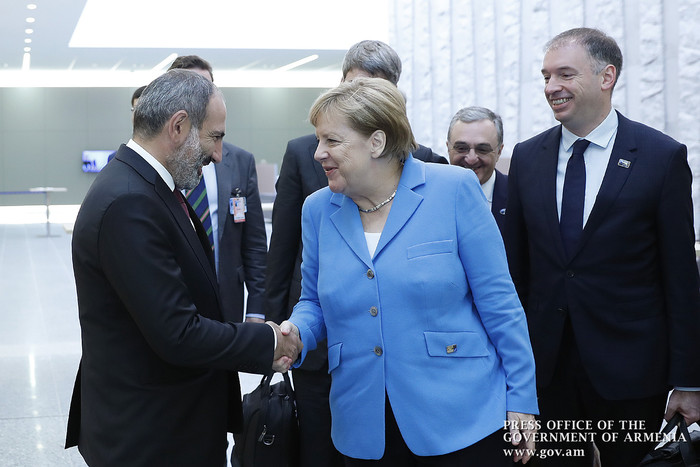 The visa liberalization would provide Armenian citizens with more and better chances to travel to the EU states and explore more opportunities. However, it is also a risk for a small country like Armenia, where every 3rd person or roughly 1 million people have left the country in the past 25 years in search of better economic prospects.

It remains to be seen how the new Armenian government tackles the country’s most difficult challenge – the shrinking demography.

Ani Grigoryan has been working at one of the top online media in Armenia, CivilNet TV for over 5 years. She covers a variety of topics, ranging from social, political, economic issues, to human rights and civil society. She has a Bachelor’s degree in International Relations from the European Regional Educational University. She is also a freelance journalist for the Caucasus regional media Chai Khana.