The identity of the real owners – the ‘beneficial owners’ of companies – is often unknown or hidden, which remains a big problem for authorities and civil society. The issue has affected other sectors and often helps to feed corruption and tax evasion. Having this problem is common in most of the countries that have introduced beneficial owners register. 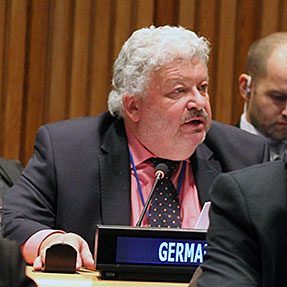 Germany is one of the mentioned countries having an approved law on anti-money laundering, which, however, faces difficulties related to its implementation. Stephan Ohme, expert at Transparency International Germany, says that the register and the law on beneficial ownership in Germany have some visible problems that need to be solved through the upcoming changes of the law. German Finance Minister Olaf Scholz has declared that the draft bill would bring Germany in line with the highest international standards in the fight against money laundering. Currently, German authorities are discussing the new regulations of the law.

The rules are not only relevant for German entities and German shareholders, but for foreign groups or organizations (including private equity groups) that have or intend to acquire          holdings in German entities. Coming to the current 25 percent, Ohme says that they would like to see 10% as a standard. “But even for 25%, it would be good if we knew not only the name of the owner, but also had an open data and an opportunity of searching in a public website.”

Adopting the AML (Anti-Money Laundering) law in 2017, Germany introduced rules on the disclosure of the ultimate beneficial owner(s) of German companies. According to the law, all the companies registered in Germany have to provide information on their beneficial owner(s) to the Transparency Register. Using this register is common for most of the EU countries, since laws are based on the fourth EU-Money-Laundering Directive (EU 2015/849). This obligation applies to all natural persons qualifying as beneficial owners and all entities or persons directly controlled by them, irrespective of their place of residence or incorporation.

According to the 4AMLD, corporate entities are required to obtain and hold adequate, correct and current information on their beneficial ownership, including the features of the beneficial interests held. The information must be stored in a national register (Transparency Register).

Stephan Ohme notes that one of the best experiences of BO is in the United Kingdom: “Very often we compare the situation in Germany with the UK. They have a much more advanced law. They use the open data format and have public access to the register”. Ohme says using open data is more effective for it allows finding out who the beneficial owner of a certain company is. It also helps to discover all the companies that have the same owner. In any case, there are many technical and juridical problems of implementation of the law.

On April 19, 2018 the European Parliament adopted the 5Anti-Money Laundering Directive (5AMLD). Meanwhile the German authorities currently continue to discuss future changes of the most important aspects of the functioning law. Mr. Ohme underlines that one of the key issues is that the current register does not include open data format. However, for Transparency International expert, the necessary changes are related not only to the BO register.

There is a need to develop new laws on land register, as the current one does not regulate cases when the owners of certain land are not from Germany. They can easily avoid being registered. “The land register is a big issue: we have beneficial ownership register, which is nice for the companies, but we see that a lot of money laundering taxpayers are in this sector. The lands, I mean. If you want to buy a house in Germany and open a company there, your company will be in the land register, but no one could know that you are behind that company. That’s because it is not obligatory,” Ohme continues.

Another problem that needs to be addressed is the financial secrecy of Germany.  Germany is one of the most “secret” countries. According to Financial Secrecy Index (FSI), Germany accounts for over 5% of the global market for offshore financial services.

The Role of Media and German Owners of Media Organizations

Stephan Ohme noticed that German journalists consider beneficial ownership register to be an ineffective thing, which has its reasons: on the one hand, the register has quite difficult structure and it is hard to find something there. On the other hand, it is not certain that the registered person is exactly the beneficial owner.

Almost of the same opinion is Lisa-Maria Kretschmer, head of research on beneficial ownership program at Reporters Without Borders. She thinks that some of the beneficial owners are trying to hide their identity due to different reasons. When reflecting on the situation of freedom of media in Germany, she notices that it is quite different and complicated in comparison with other countries. “We can’t say that in Germany officials tend to hold media organizations or are owners of media organizations. We can’t see the mixture of media and politics in Germany as in many other countries”.

“Media is a business and it needs to be a business”, Ms. Kretschmer thinks, “otherwise, it could be impossible to avoid influences.” At the same time, Mr. Ohme notes that in Germany, even when almost everyone thinks that the press is free, there are many examples of different influences on the media. Some politicians, powerful families or others might affect freedom of the press. They can do it directly or indirectly. As an example, he mentions the largest publishing house “Spiegel” owned by one family.

Ani Avetisyan studies journalism at Yerevan State University. Until June 2019 she has worked for “Ampop Media” as a data journalist, mainly focusing on the analyses of political and economic issues. Interested and specializing in fact-checking and investigative journalism, she is currently employed as project assistant at Freedom of Information Center Armenia (FOICA).