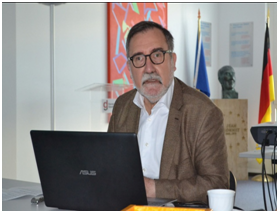 To attract more foreign investors Armenia first needs stable judiciary. The Chairman of German-Armenian Society NGO Dr. Raffi Kantian believes that if a country doesn’t have a stable judicial system, it will have certain problems. “You don’t want to engage with a country, be it Armenia, Georgia or any other state, if you don’t have a chance to get your rights protected in court,” Dr. Kantian says. Being the head of an association, which is active in the promotion of mutual understanding between Germans and Armenians, Raffi Kantian says that German entrepreneurs are waiting for what will happen after the snap parliamentary elections in Armenia scheduled for December 9,  2018, in particular whether the reform process will continue, and whether the judiciary will be able to eliminate bribes from the system. The Chairman of German-Armenian Society notes that one may argue that there is no proper judicial system in Azerbaijan, but entrepreneurs still invest there. According to Dr. Kantian, this is because of the amount of money one can earn in Azerbaijan: it is indeed a lot due to gas and petrol, etc. “Armenia is a very small market. So, doing business in these proportions is not very realistic, but if you still do business, you must be sure that there is appropriate judicial system. If you, for example, do not make judiciary reforms, then the chances of getting investments from outside are very low,” Dr. Kantian underlines. 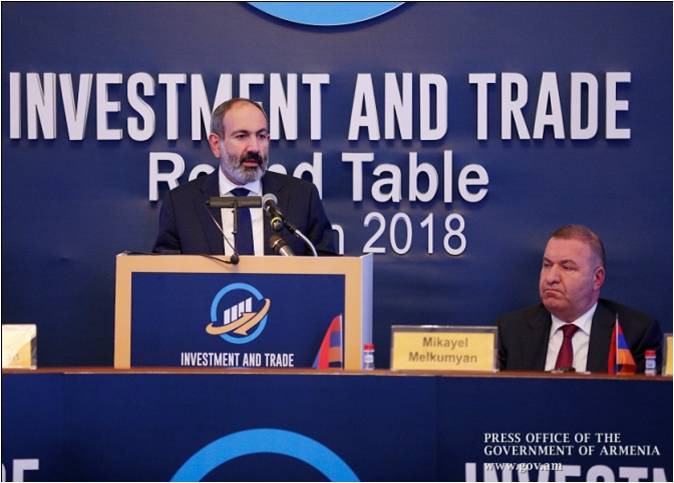 The new government of Armenia understands this well enough. Acting Prime Minister Nikol Pashinyan, while attending the “Investment and Trade” Forum in Yerevan on October 26, 2018, pointed out that today’s environment is conducive to investment in Armenia, for everyone is equal before the law in the country. In his speech at the Forum, which brought together ministers, parliamentarians, entrepreneurs, representatives of major companies from 20 countries, Nikol Pashinyan stated that after the Velvet Revolution of April-May 2018, the government set a goal to reinstate the rule of law in the country and turn Armenia into a country of labor and high technologies. “Entrepreneurs and investors are considered to be our greatest allies on this path. This is why we urge them to invest in the Republic of Armenia. We want to encourage labor and success in our country, and we tell investors to come to Armenia, get richer and enrich others,” the acting Prime Minister said.

Hans-Jochen Schmidt, former German Ambassador to the Republic of Armenia, informed that a delegation of small-sized business owners was going to visit Armenia in November to study the opportunities.

It must be noted that Germany is Armenia’s number one partner among the EU member states, having provided hundreds of millions of Euros in aid and low-interest loans to the country since the 1990s. Germany is also one of the most active donor countries supporting the socio-economic reforms in Armenia: it is, in fact, the second after the United States. Germany has provided hundreds of millions of dollars to Armenia as technical assistance. 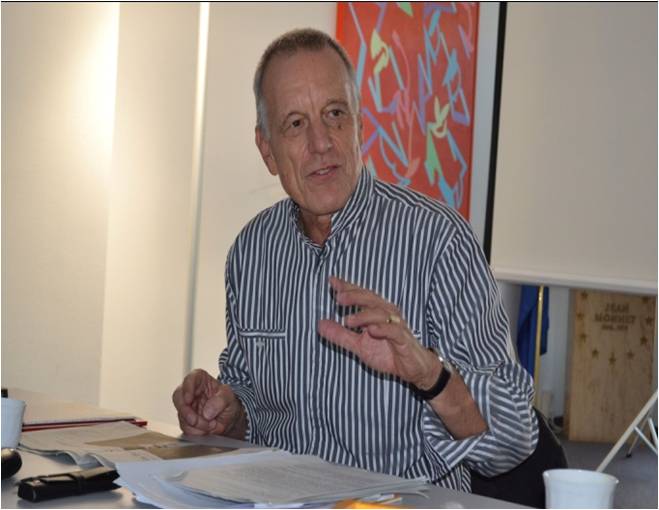 Hans-Jochen Schmidt, former German Ambassador to the Republic of Armenia

“The IT field is of course quite known. There is surely certain interest in good talents; TUMO Center for Creative Technologies is a good example. I think the largest investments in the mining field at the moment will continue as long as the government supports the activities of this investor, but I hope that there will be other sectors as well. And, of course, we are interested in contributing to improve your infrastructure,” Hans-Jochen Schmidt says. He notes that Germany followed Armenia’s present acting Prime Minister Nikol Pashinyan’s fight against the former government in spring with great interest and empathy. He claims that Germany will continue its support to Armenia in order to make sure that the processes started after the Velvet Revolution (for instance, the fight against corruption) continue. “We wish Armenia the best in overcoming the economic, social problems, and to live up to this challenge. It will not be easy for your government, because they need sufficient budget in order to realize some of the promises Pashinyan made. And this is not so easy within a short term. I don’t want to discourage you, but you have to have a lot of courage and unfortunately patience as well. At the moment you have a primary task of making sure the people at least feel supported by the government, and the living standards improve for large part of the population,” former German Ambassador to the Republic of Armenia says.

Diplomatic relations between the Republic of Armenia and the Federal Republic of Germany were established in January 1992. It is remarkable that during this period there were more than 20 official visits from Armenia to Germany at the level of President, Prime Minister and Minister of Foreign Affairs. From 1995 there were a few official visits to Armenia by German politicians only at the level of Vice-Chancellor, Federal Minister of Foreign Affairs, and President of the German Bundestag. So, in this context Merkel’s visit was unprecedented.

While in Yerevan, Chancellor Merkel visited the Armenian Genocide Memorial, and confessed that the first place she thought she should visit in Armenia must be Tsitsernakaberd Memorial. 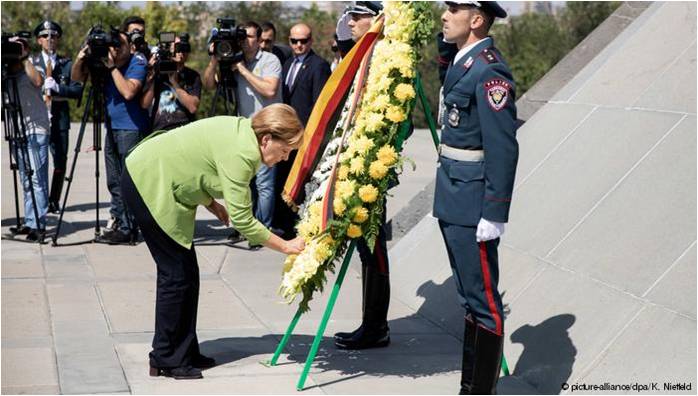 Dr. Raffi Kantian describes this as a very symbolic gesture. However, Merkel avoided the use of the term ‘genocide’ in Yerevan. But anyway, according to Kantian, Merkel’s visit to Tsitsernakaberd Memorial was a strong message, since she was harshly criticized for not attending the sitting of the Parliament and missing the Bundestag voting on Armenian Genocide Resolution in 2016. It is noteworthy that during the press conference in Yerevan asked about visiting the Genocide Memorial, Angela Merkel stated that she had visited Tsitsernakaberd “in the spirit of the Bundestag 2016 Resolution.”

The Resolution titled “Remembrance and Commemoration of the Genocide of Armenians and Other Christian Minorities 101 Years Ago” was adopted almost unanimously, and was met with anger by Turkey. The Resolution not only recognizes the actions carried out by the Ottoman Empire towards the Armenian population as genocide, but also points out Germany’s historical responsibility in this crime. 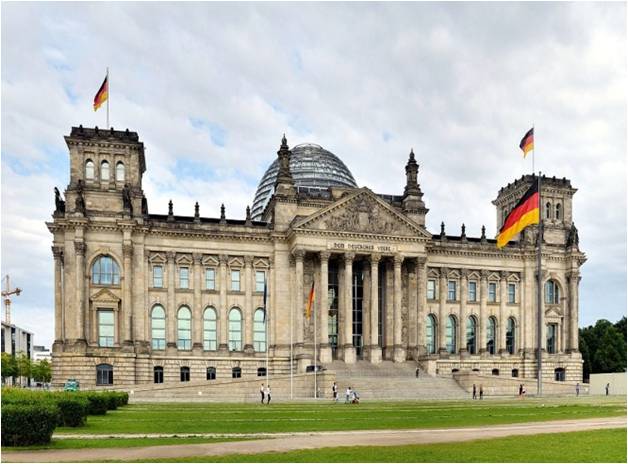 Along with its huge importance, the Bundestag Resolution is not legally binding. The Chairman of German-Armenian Society Dr. Raffi Kantian says that currently he doesn’t see any chance of having a second, more comprehensive resolution on the Armenian Genocide. “I don’t think that parliamentarians will try pushing forward another comprehensive Armenian resolution. I know that some had initiatives regarding the punishment of the denial of the Armenian Genocide, but those are just initiatives,” Dr. Kantian notices.

And it is not surprising. Berlin’s diplomatic row with Ankara escalated after the Bundestag Resolution 2 years ago. Before its adoption and right now there are still many problems between these two NATO allies on very different issues. A proof to that could be considered the October 2018 travel advice by the German Foreign Ministry. It warned citizens visiting Turkey to be extra cautious about their social media posts in response to a number of cases of Germans arrested for online criticism of Turkish President Recep Tayyip Erdogan and his government. Thus, a new, more comprehensive resolution on the Armenian Genocide in Bundestag would be inappropriate, at least in the near future.

Marine Meliksetyan studied international journalism and linguistics at Yerevan State Linguistic University after V. Brusov. Currently she works at “Yerkir Media” TV as a journalist. She is also anchor of a TV program that airs once a week. She reports top stories from around the world.