December 11, 2019
Forum German-Armenian Journalist Exchange 2019
IN A QUEUE TO BE SENT BACK

Berin, Westend. The silence of a quiet German street is regularly interrupted by greetings in Armenian. The Embassy of Armenia in Germany is located here, in a three-store house-like building. In front of the Armenian Consulate, a group of Armenians are waiting in the queue to be called from inside. These people of the same nationality and native language share the same fate and now also the same problems: they were notified by the German authorities to leave the country and go back to Armenia, whose citizens they are, in short terms. 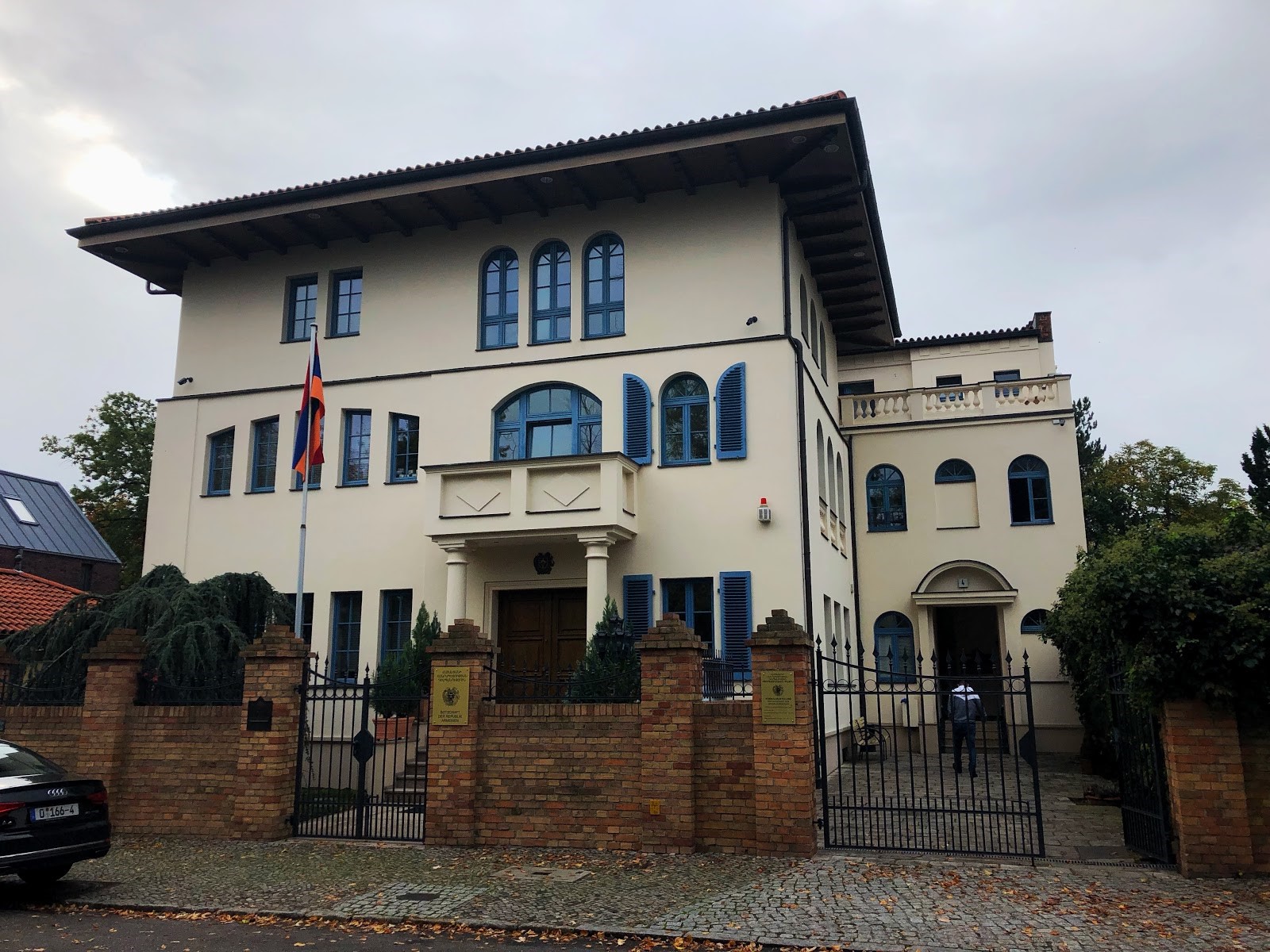 The building of the Armenian Embassy in Berlin, photo: Aren Melikyan

Germany is one of the main destinations for Armenians to move to. The number of Armenian asylum seekers in this European country has enormously increased in the last decade, by nearly 200 times. Right now there are more than 6000 pending applications from Armenian asylum seekers that German authorities have to make a decision on. Only in 2018 approximately 1900 Armenian citizens applied for asylum in Germany. However, this number is not so impressive compared to the 2016 data: 5405 Armenians submitted asylum applications during the year. 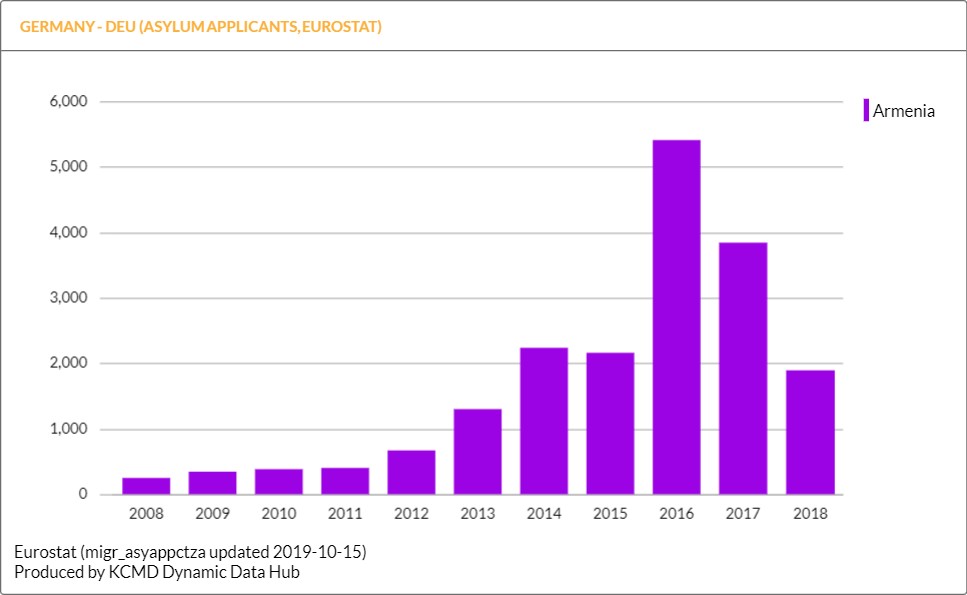 Anahit [name changed] is one of these 5405: she is now in the queue in front of the Armenian Consulate in Berlin. A week before she had been informed about her upcoming repatriation. She has moved to Germany to get free medical care.

“We moved here in 2016. We were an ordinary family back in Armenia. If it weren’t for the illness we would have never come here. I never even knew the place of Germany on the map,” Anahit says.

The woman sold everything she owned in Armenia and packed her luggage for Germany.  “People were telling me the healthcare system of Germany is well developed. All these people you see here, they ran away from Armenia for the same reason: the prices and quality of healthcare,” she points at the line.

There is no exact number of Armenians that have been repatriated. In the last six months, approximately 700 are reported to have returned to Armenia. Some of them did come back voluntarily and some had been forced after several times of being notified. People fight until the very last, trying to escape their ways back to Armenia.

“I had a one-room apartment in Yerevan, I sold it and everything else I owned and came here. I am satisfied with my life in this country. Me and my husband are getting about 720 Euros per month, and I don’t have to pay for extremely expensive surgeries. I can afford everything myself here,” Anahit says.

She lives with her husband. All her family, including her son and his fiancée are in Germany now. Anahit’s brother is also in Germany for the same reason. However, the woman insists that Armenian hospitals do not have enough capacity to take care of her. She is afraid that her return to her home country may risk her life.

Unlike her, the life of Lusine [name changed] is not at risk anymore. After leaving Armenia in 2016 she asked for asylum in Germany. With her husband and two children, they live in Cologne, the German center of the Armenian community and home of thousands of Armenians.

At the beginning of 2019 Armenia’s Prime Minister Nikol Pashinyan started his official visit to Germany from this city. Pashinyan called it ‘capital of the Armenians of Germany’.

This visit, however, provoked the anger of some Armenian asylum seekers in Germany. They believe that German authorities are sending them back because “they were asked by Pashinyan to do so.” The political changes in the spring of 2018 known as ‘Velvet Revolution’ turned Armenia into a ‘safe country’. This is a reason for many European countries, including Germany, to send back thousands of Armenian asylum seekers, who left their home country because of political, religious or gender-based oppression.  This reason also makes thousands of Armenians upset.

From the Armenian capital of Germany, Cologne, another young man is in the queue, Aram [name changed], who tells his story. The German healthcare system was not sufficient to save his father. They had moved to Germany in 2015 to get free medical assistance. However, his father died after two years in Cologne. Now Aram has been notified he has to live the country. And this is not the future the young man imagined for himself.

Aram is a young artist from Armenia’s Shirak region, now actively engaged in Cologne’s Armenian community life. “Can you see the asylum seeker’s number on the cat? That cat is me,” he says while showing a photo of one of his paintings. Unlike the others, Aram does not have any health issue. The compulsory military service in Armenia holds him back from returning to the country. He is going to pay to an attorney, who, he believes, will help him stay in Germany.

“I see my future here. Why don’t I want to come back? Because all my friends who I studied with end up uneducated, because of lack of money,” Aram concludes. 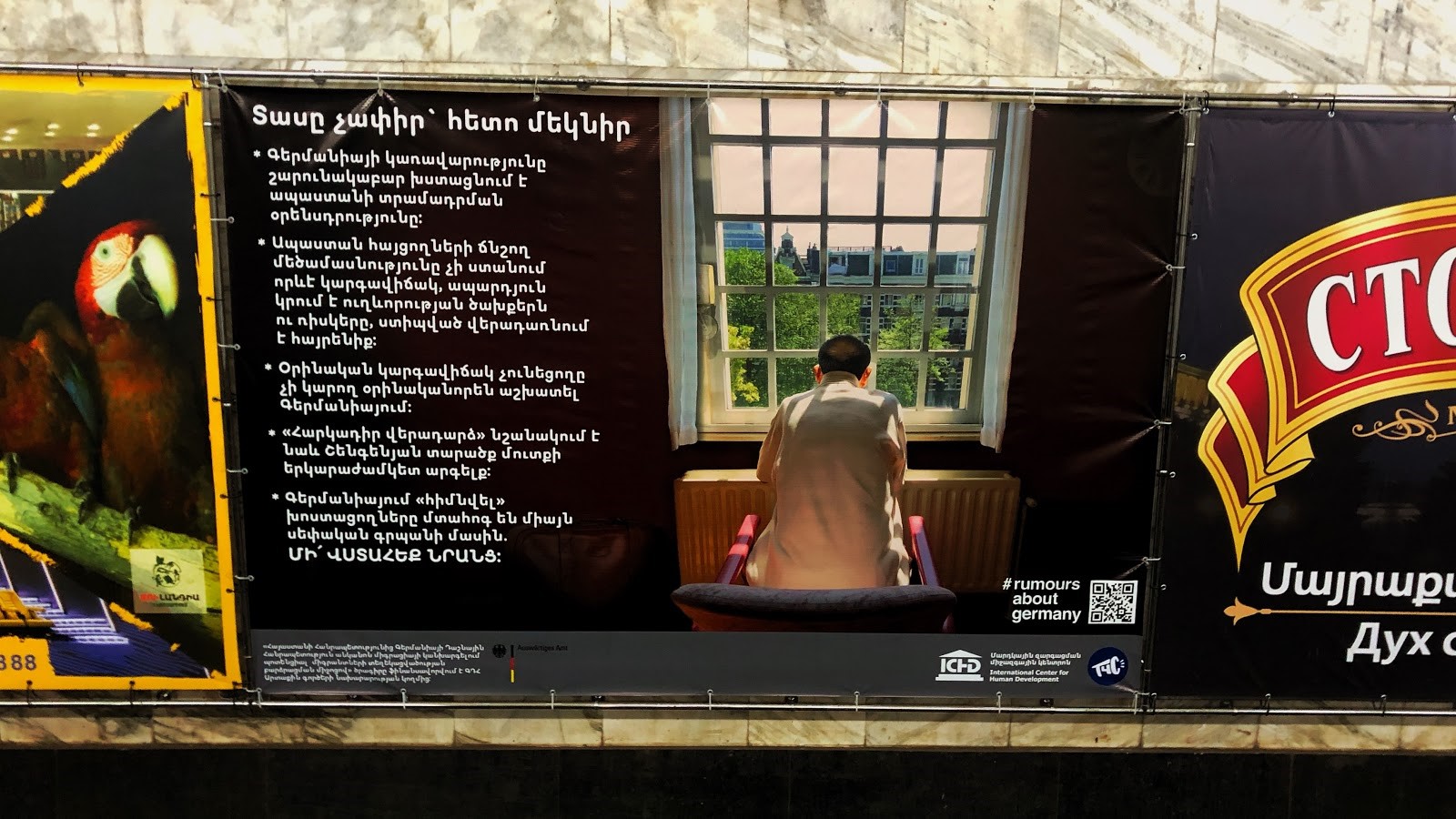 Back to Yerevan, I come across a social ad, as the escalator in one of the metro stations of Armenia’s capital starts moving up. The headline to the left of the image of a hospital patient reads ‘Measure 10 times before leaving’. The campaign is financed by the German Ministry of Foreign Affairs, which, with help of local Armenian organizations, is trying to inform citizens about possible challenges they might face while trying to make their ways to Germany after having been left with no hope in their local hospitals. They inform people that the majority of asylum seekers do not get any status in Germany, bear the expenses and risks of the travel in vain and have to return to their homeland as a result.

“They can send us back, tighten the rules, but can they make a mother trying to save her child’s life hold back from doing the same?’’ an Armenian asylum seeker in Berlin asks.

Aren Melikyan is a multimedia journalist. He studied journalism at Yerevan State University, after which he started working as a TV reporter at the Public Television of Armenia and as a fact-checking journalist for the “Union of Informed Citizens” NGO. Currently, Aren works as a reporter for a number of regional media platforms, such as Chai-Khana.org, EVN Report. He focuses on storytelling and documentary, mainly covering human rights and social issues.