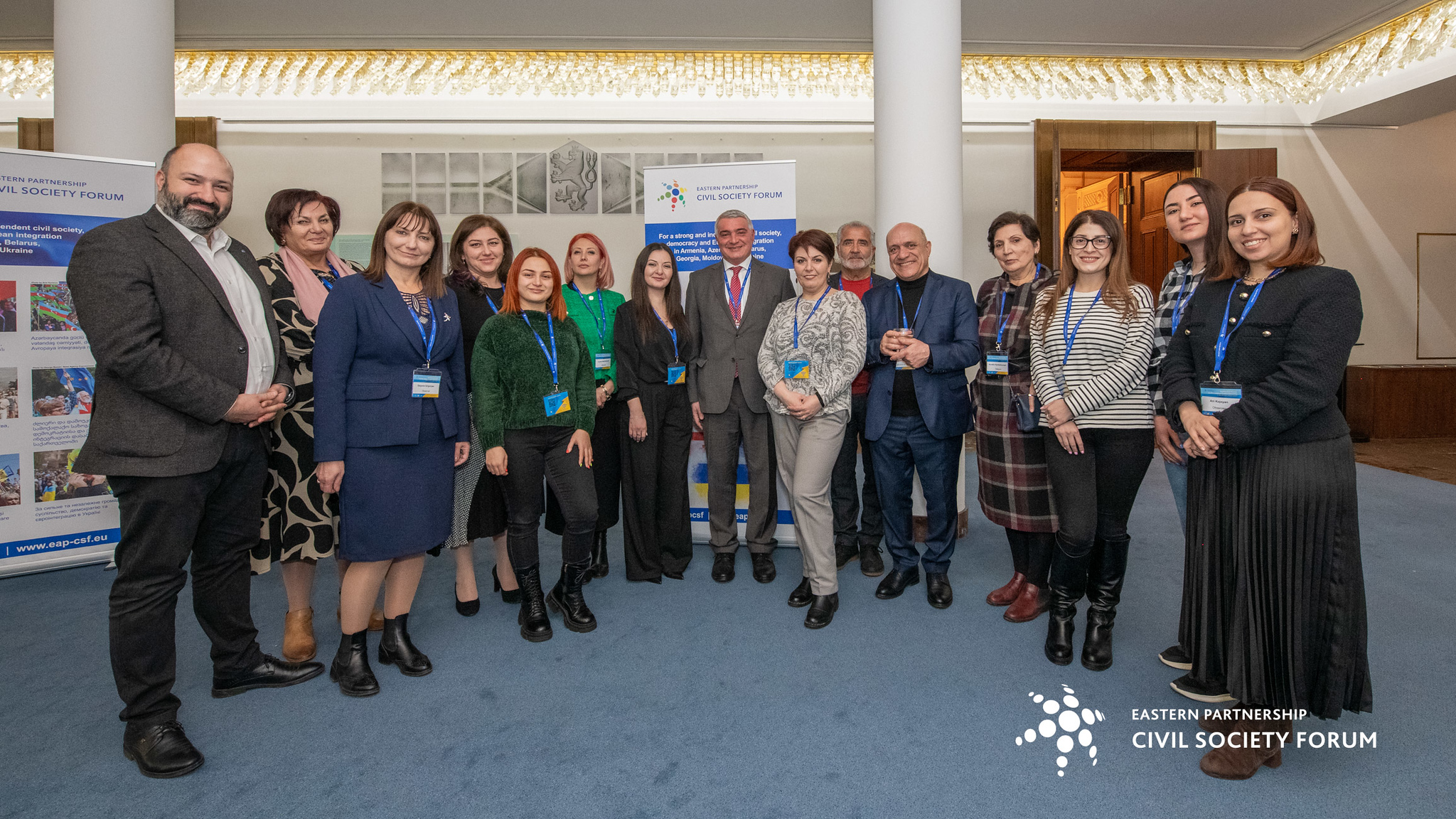 On December 5-7, the 14th Annual Assembly entitled “Resilient Civil Society for a more Ambitious Eastern Partnership” was held in Prague, which brought together more than 200 civil society organizations from the EaP and the EU countries, as well as EaP and EU decision-makers to discuss the current challenges, the landscape of Eastern Partnership multilateral cooperation, the role of civil society and how to ensure its future resilience.

The assembly was also attended by the EaP CSF ANP Secretariat and ANP Delegates from Armenia.

One of the Panel Debates of the 14th EaP Civil Society Forum was devoted to “A stronger Eastern Partnership that withstands war” topic.  The Russian war of aggression against Ukraine coupled with the European Council’s decision to grant EU candidate status to Ukraine and Moldova, and the EU perspective to Georgia marked a new phase in the Eastern Partnership policy.

During the panel debate, the speakers addressed the following questions in their speeches: What will be the priorities of the revised EaP policy? How will the EaP countries benefit from it? What areas of cooperation should be prioritised and why? How can the EaP support mitigating the effects of Russia’s war in Ukraine?

The next Panel Debate was devoted to the “Strengthening energy security through EaP multilateral cooperation” topic. During the panel debate, the following questions were addressed. How can the EU and EaP work together to strengthen energy security in the continent? How can the risks of energy-crisis induced democratic backsliding be avoided? How can we avoid replacing one dependence (on Russian supplies) with another dependence (on China’s supplies for the renewable industries)?

Lusine Hakobyan, President of Europe in Law Association, the Co-Chair of the EU-Armenia Civil Society Platform and the EaP CSF ANP Delegate stated that civil society very much understands the importance of peace in the South Caucasus region. She also pointed to the fragility of the Armenian democracy and the interdependence of the external and internal threats and their danger for the Armenian democracy. In the described context, she inquired from Dirk Schuebel, Special Envoy for Eastern Partnership at the European External Action Service, whether the EU has the leverage and the necessary tools to mediate for peace between Armenia and Azerbaijan on fair terms to prevent Armenia from making concessions under pressure from Azerbaijan with a view to preventing another big crisis in the South Caucasus and the Eastern Partnership region in general.

Gayane Abrahamyan, Founder of the “For Equal Rights” NGO and the EaP CSF ANP Delegate stated that today the international community faces a terrible dilemma: democratic values, protection of human rights or provision of energy resources, replacing one Dictator with another Dictator who is committing the same war crimes in Nagorno-Karabakh and invading Armenia’s sovereign territory.

It is really important to realize that in this marathon for energy resources, if societies lose faith in the values of democracy and human rights, then the wave of anti-democracy, that is raging now with all possible false narratives, anti-democratic propaganda will win, nihilism with respect to values will have irreversible consequences on the future democratic aspiration in the region. If International community is supporting dictator Aliyev labeling him as a “reliable partner”, so the dictator becomes even more uncontrollable not only committing crimes against Armenians, but also in its internal policy.

Within the framework of the Assembly, the EaP CSF National Platforms’ Secretariats’ meeting also took place, during which the Secretariats discussed several issues of importance,  presented the current state and progress of the 2022 implemented projects, the main challenges conditioned by internal and external factors, as well as the perspectives and main directions for 2023.

During her presentation, Ani Kojoyan, Executive Director of the “EaP CSF ANP Secretariat” NGO, presented the Amendments in the ANP Charter, introduced the main activities and events implemented and calls, announcements initiated during the reporting year.

The details of the 14th Annual Assembly is here.