December 15, 2019
Forum German-Armenian Journalist Exchange 2019
‘THEIR AIM IS TO MAKE US AFRAID’ 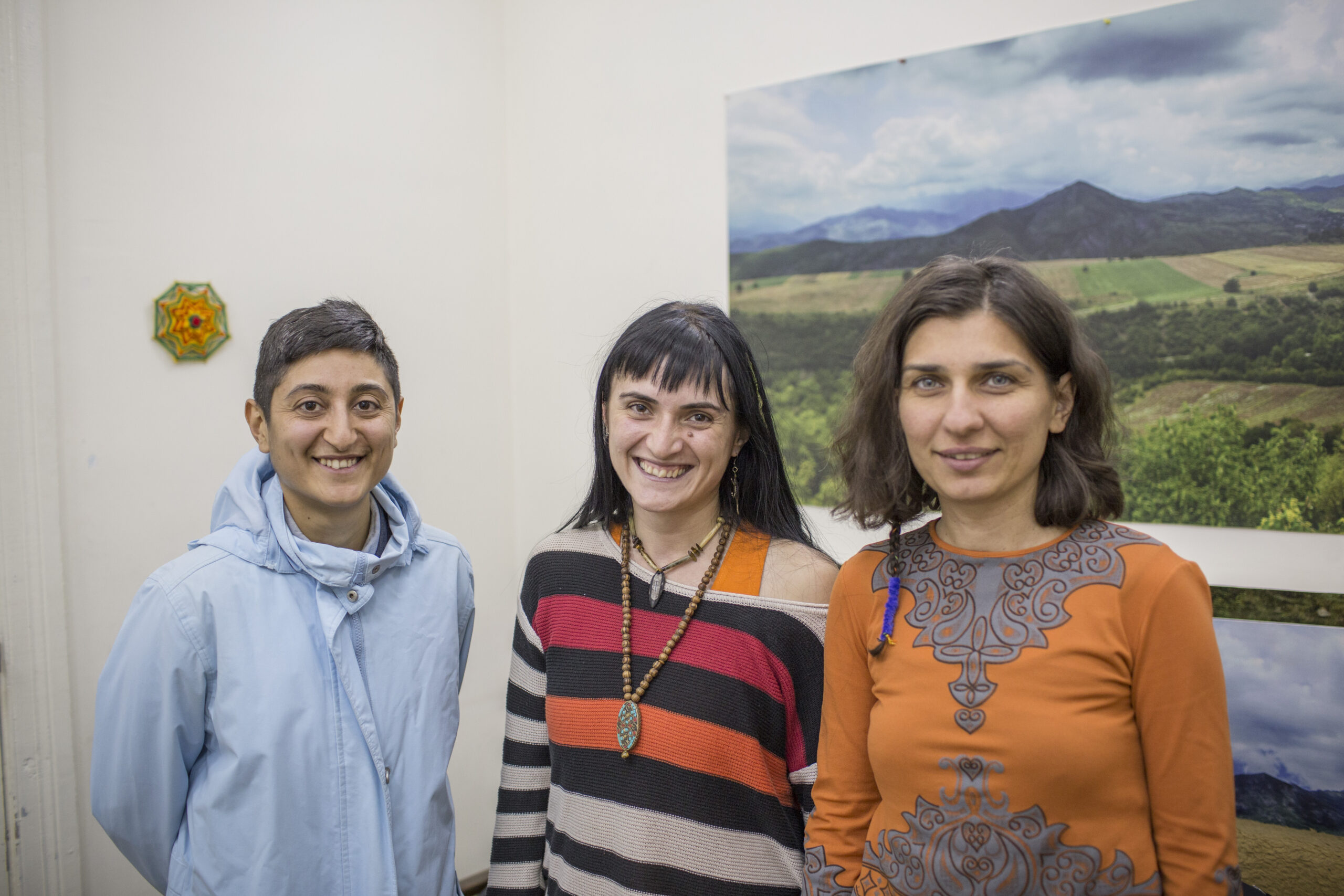 You are all three environmental activists working for an initiative called ARMECOFRONT. How did your engagement start?

Arpineh: Since 2007 there have been a lot of different environmental protests or public space actions in Armenia. The number of active people is small. So, we all know each other. Ani was here from the beginning, Mayranush and I joined later.

Ani: Armecofront exists since 2013. Before that there had been a number of other environmental movements linked to specific cases such as pollution caused by mining or illegal logging of forests. So, we decided to have one initiative that includes all these movements. Right now we are five people, all of us volunteers.

Arpineh: Four women and one man.

Mayranush: But everyone seems to think that this one man controls us (laughs).

Arpineh: When he is on TV, they always say he is the head or the coordinator but we don’t know where they get this information from…

Mayranush: Actually we are non-hierarchical, so this doesn’t make any sense. 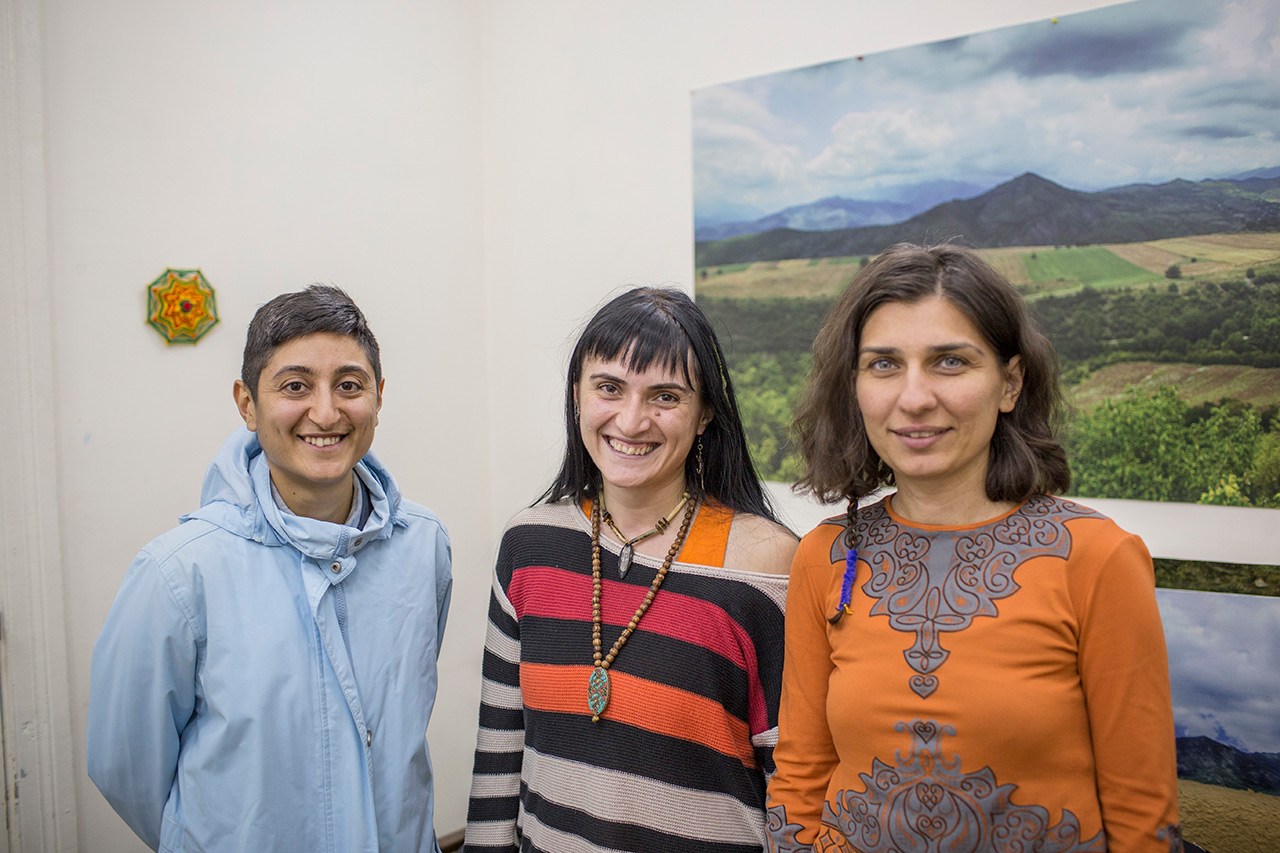 In general, it seems as if the scene of environmental activists in Armenia is dominated by women. Do you have an explanation to that?

Mayranush: One reason could be that activism in Armenia is usually based on volunteering and is not paid. So, anything that is unpaid is not considered valuable enough for men to do. A lot of people think that activism is just for those, who have nothing to do. Like house work: to the outside it might seem that men do the work, but actually most of the work is done by women.

Does feminism play a big role in your engagement for environmental protection?

Arpineh: …Women have jobs that depend on the environment – in the sanatoriums or in the resorts. They are teachers or health workers. But if the mining starts, it is very likely that they lose their jobs and become housewives.

Mayranush: On top of that, in the regions a lot of people depend on agriculture, and it is mostly women, who have to deal with the polluted soil and water. All the house work is done by women. And because women are so busy with that, they have almost no chance to get information and education about the effects of mining on health. For example, when we were collecting signatures for the petitions, it was always the husband to decide whether to sign or not. The wives almost never had a say.

Are you able to make a change with your activities?

Mayranush: I believe so. The mere appearance of us is already empowering. The women from the village see that we can act independently and freely, and understand that they also have this choice. And in general, we try to give women more space during our initiatives.

Arpineh: Yes, I think people are becoming more gender-sensitive. During the demonstrations in Jermuk, for example, the protesters made sure that there were also women among the speakers.

Ani: I think we changed some things during these 500 days of the blockade of roads. We organized a march from Jermuk to Yerevan during which women were keeping the blockade.

When the government announced that Lydian mining company would be allowed to proceed with the exploitation of the Amulsar mine, locals started blocking the roads. What is the current situation there?

Ani: People are very tired and exhausted. They are taking shifts, so that the roads are blocked 24 hours. They spent already one winter there. A lot of them have debts.

Arpineh: Yes, it’s a very difficult situation. Some of the local activists are sued by Lydian, the mining company. They are trying to play off the locals against each other with different promises like buying land from them.

Was it difficult for you to reach the people in the regions and mobilize them for the protests?

Mayranush: Well, they see our hard work for all those years. And through the website and our Facebook page they can get information. We are trying to educate people and make them aware of the issues. And I believe that this works. Often times they want to do something but they don’t know how. We share our experience and expertise with them, and they see that someone stands with them.

Ani: Another reason why they know us are the petitions we organized against the mine. We knocked at a lot of doors, talked personally to the people and collected signatures. We give them contacts and advice. If they say they will do protests, we may join then, but we don’t do the work for them.

When Prime Minister Pashinyan took over the power after the Velvet Revolution last year, he promised to do things differently than the last government. Yet, he seems to be in favor of the mine. Did you expect a change in the environmental politics after the revolution?

Arpineh: We know Pashinyan for quite a long, and he always took a neoliberal stance. The only slogan of his party was to fight corruption, but for me they don’t have any understanding of social issues. They had no environmental agenda. So, I wasn’t really disappointed or surprised. Only one person in the government, the current deputy speaker of the Parliament, is a former environmental activist. But the party itself is vertical and very male-dominated, so she doesn’t have much influence.

Mayranush: There was some hope connected with the activist friends, who joined the party. But these hopes were quickly erased because the ones, who wanted to contribute to a real change, couldn’t hold on there. They felt pressured and left the system or were fired. And the ones that stayed, get adapted to the situation. So actually we didn’t gain much but rather lost some activist friends.

Arpineh: At some point there was a moment, when it seemed like Amulsar would be stopped. The Prime Minister announced a moratorium on mines, which means they wouldn’t give out further licenses until the whole sphere was reformed. He talked about the problems in the mining area and promised that only mines corresponding to the European standards would be allowed to operate. So, there were some signals. But then it changed.

Despite the different opinions you still have to work together with the government. How does the cooperation proceed?

Arpineh: With the previous government we had zero cooperation. We didn’t write any requests and we didn’t go to any meetings. Sometimes we would write some letters to get further information. They were writing responses that didn’t contain anything. And now, it is actually the same: it just takes them longer to answer. But we cooperate with the state bodies in judicial cases, although we don’t trust them completely because they are still under the influence of the old government.

Ani: We actually don’t want to go against the government. We are trying not to push hard, because otherwise the old elite might use this to come back to power. It’s a complicated situation for us too. Before we knew who the enemy was. But now, we are trying different ways.

Do you receive threats because of your engagement?

Ani: Yes, of course. For example, I spent a lot of months during the summer in the blockades and once a Lydian worker tried to drive his car at me. There are also a lot of fake pages on Facebook that keep attacking and harassing us. They take our personal photos and make videos and fake news with them. And it’s basically impossible to sue them because they are fake. Once we disclosed one person connected with Lydian and we are suing him now.

Mayranush: They are playing on us being women and moral values and all that stuff. They know it’s a traditional society, so they use this against us. For instance, they use the fact that Ani is a single mom.

Ani: Yes. You can see this in the comments. They tell me to go and take care of my son, and that I am a bad mother. When we talk about topics like mining, they get personal and make comments on our appearance. But it’s not working. People understand that it is misinformation.

Does this scare you?

Arpineh: Not yet. We’ll see how it goes. Right now we don’t feel these threats so strongly. In other countries environmental activists are under much more pressure.

Ani: Their aim is to make us afraid. But if you’re not afraid of them, they will be afraid of you. And that is what’s happening. When they organize an event, they know that we can be there and ruin it. For example, when we raise our hands for a question, everyone holds their breath (laughs).

Mayranush: When they get active against us, we feel like we are successful.

What is your strategy for the future?

Arpineh: We want this issue of mining to finally be closed. After more than ten years of fighting, there is a common understanding that mining is not good for the environment and public health. So, we are trying to make it bigger than just the case of Amulsar and fight for general prohibition of new mines. That’s why we also do awareness raising in the regions, so people understand the risks.

Ani: One thing are the current court cases against violations of law by Lydian. At the same time, we work with international organizations to make the case known outside of Armenia. And this is quite successful.

Paul Toetzke is a freelance journalist and photographer living in Berlin. His texts appear among others in the taz, Chrismon and Friday. He prefers writing reportages and travels regularly to Central and Eastern Europe for his research. He studied European Studies in Maastricht and Kraków and Eastern European studies at the Free University in Berlin.