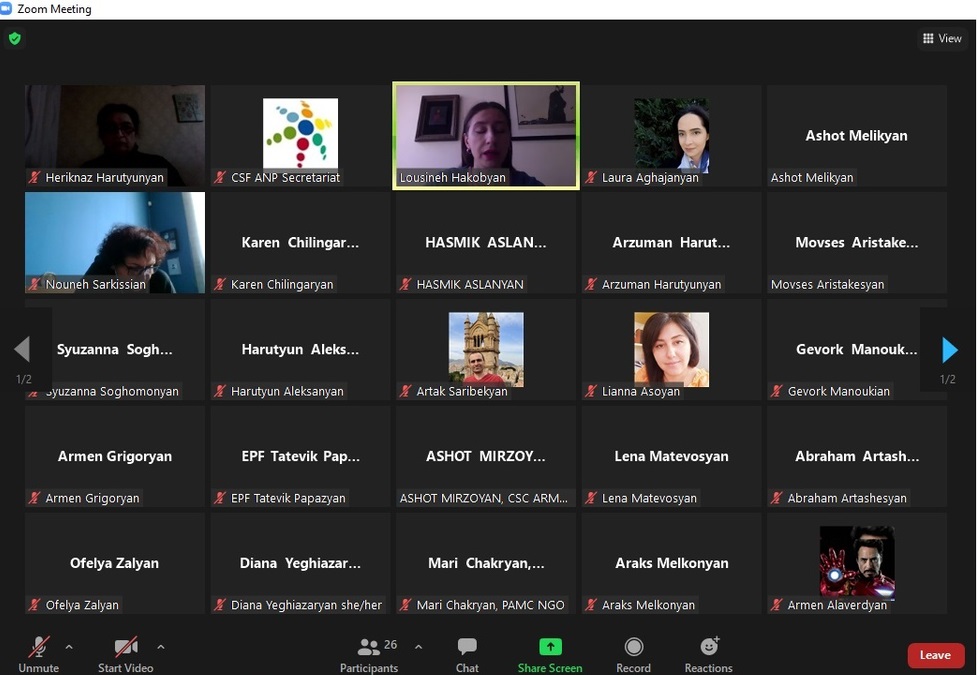 At its online Assembly held on December 28, 2021 the CSF Armenian National Platform summed up its annual activities. Reports were delivered by the CSF Armenia Country Facilitator Lousineh Hakobyan and the ANP Secretariat Managing Director Heriknaz Harutyunyan. It was noted that despite the general decrease in moods caused by the war, the Covid-19 pandemic, as well as internal political tensions in the country, the Platform was able to carry out the work outlined in the strategic plan. At meetings with Armenian and EU officials the ANP members have raised issues such as the return of prisoners of war and civilians held captive in Azerbaijan for more than a year, the protection of Armenian cultural monuments in the territories controlled by Azerbaijan, and the social assistance to displaced families.

The attendees highlighted the importance of keeping track on the issues raised by the Armenian delegates at the CSF Annual Assembly and using the opportunities for civil society dialogue with the Government of Armenia. A presentation on the process of formation of the EU-Armenia bilateral civil society platform was made for the Assembly participants, they were urged to actively participate in the elections.

Valuable studies on economic and legislative reforms in Armenia, a number of sectoral issues, and the socio-psychological situation created after the Artsakh war have been carried out within the framework of the ANP Working Groups’ activities. Through the efforts of the Center of Economic Right, a guide for CSOs on public monitoring of budget programs has been developed.

The ANP WG3 two-day outgoing workshop to discuss the role of civil society in environmental decision-making held in Lchashen village of Gegharkunik region not only discussed almost the whole spectrum of the country’s environmental problems, but also developed a package of recommendations on the draft law “On Making Amendments to the RA Law on Environmental Impact Assessment and Expertise”, which was submitted to the Ministry of Environment and Yerevan Municipality.

Within the framework of activity titled “Social Entrepreneurship as a Model of Dynamically Integrated Economy and Social Dialogue” program, the ANP Working Group 5 held an informative and fruitful workshop, which was also outgoing in Gegharkunik region.

The Assembly emphasized the cooperation of the member organizations of the Platform, the use of opportunities to work together and raise the necessary resources for the Platform.

The Country Facilitator also touched upon the issue of suspending Consumer Support Center President Ashot Mirzoyan’s membership to the ANP for having used hate speech, and having published comments at the CSF Annual Assembly, which run contrary to the CSF values and ethical norms.