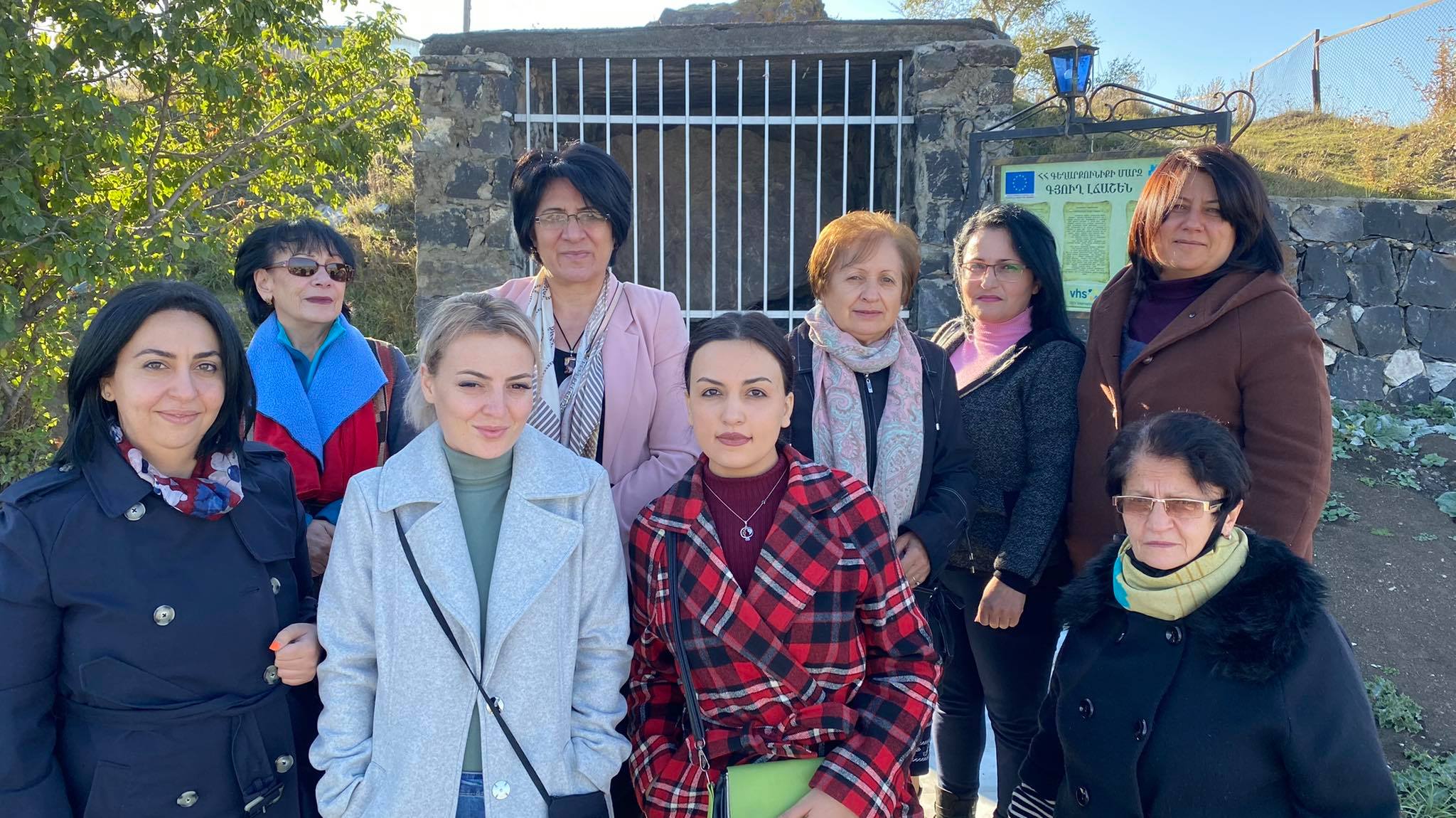 On October 9, 2021 the EaP CSF Armenian National Platform Working Group 5 held an outgoing meeting in Gegharkunik region’s Lchashen community. The meeting held in the premises of Lchashen’s “Forgotten Kingdom of Etiun” and “Bohem-Studio Teahouse” social enterprises was attended by the members of WG5, representatives from social enterprises, experts, as well as members of WG2 and WG3.

The main goal of the Working Group meeting was to contribute to enhancing the capacities of the members of WG5 with regards to social dialogue and social entrepreneurship, to raise their awareness on the Armenian SE sector, and to spread the successful experience of SEs.

SE expert Nazaret Seferyan, who joined the meeting online, made a presentation on “Social Entrepreneurship and Corporate Social Responsibility, the SE Management System”. He introduced a SE model that is widespread in Europe, which aims to hire people who are not competitive in the labor market, to give them skills during the job, and then help them enter the labor market, involving other needy groups in the courses instead.

A lively discussion took place during the presentation, comparison was made between the SE models operating in Armenia and in the EU. Anahit Gevorgyan, founder of “Tagani” SE, analysed the EU model by the example of their SE, concluding that given the small volumes of the Armenian market, it is difficult to apply models functioning in the EU without modification and localization.

The participants familiarized with the activities of Lchashen “Forgotten Kingdom of Etiun” SE, “TUC” (Tourism Unique Center) SE operated by the NGO Center, “Qarapur” SE operating in Kalavan. The SEs presented their achievements and perspectives, and the impact on community life. By the example of the “Forgotten Kingdom of Etiun” SE model, it was presented how the archeological heritage of Lchashen was put in the basis of the activity of a social enterprise in order to ensure community development.

Ruzanna Ghazaryan from “Work and Motherland” NGO operating in Vayk presented a program implemented by their organization, within the framework of which they support young graduates in gaining work experience, and also encourage the employer. The examples of Martuni’s “Tagani” SE, the SE created by Goris Women’s Development Resource Center, and “Sareri Barik” SE as models of a dynamically integrated economy were very informative.

The working meeting continued at “Bohem Studio Teahouse” social enterprise, which has a significant impact on community life. The work of “Sonishka” Child Development Center, EREOstyle – production of souvenirs created by people with disabilities, “Sareri Barik”, “Innovation and Technological Community” SEs was also presented. Astghik Maranjyan, head of “Miassine” Foundation, spoke about their activities aimed at advocating for mentoring, and the efforts made to spread the idea in Armenia, and “Bon Appetit” SE, a bakery and confectionery established by the Foundation. to provide apprenticeship and employment to young people who have left the orphanage.

The working meeting was very intense and lasted longer than planned. The meeting gave the members of the CSF Armenia National Platform an opportunity to get to know each other better, to think about organizing joint partnerships, activating the initiatives aimed at improving social dialogue, as well as the newly created ones with the same goal. The participants got acquainted with the unique culture of Lchashen, visiting archeological, historical and cultural monuments.

The outgoing working meeting of the EaP CSF ANP WG5 was held within the framework of the Armenian National Platform Secretariat support to the ANP Working Groups’ activities under “Social Entrepreneurship as a Model of a Dynamically Integrated Economy and Social Dialogue” action.